Inflation is impacting schools and agents on “numerous fronts” and may result in the need for them to increase their prices by 9% in 2023, according to a new survey.

Inflation is impacting schools and agents on “numerous fronts”

The Impact of Global Inflation on the International Education Industry, a snapshot survey conducted by ALTO, shows how most agents and schools are in “no condition to absorb or sustain any further losses”.

“We are currently going through the highest global inflation rate hikes in decades,” Selim Dervish, ALTO board member and founder of Academia United, told The PIE News.

“Worldwide soaring demand and lack of supply caused by the pandemic is probably the main cause of the inflation we are experiencing today.

“This is merely the reflection of many businesses from around the world experiencing different phases and levels of this global inflation crisis in decades,” he continued. 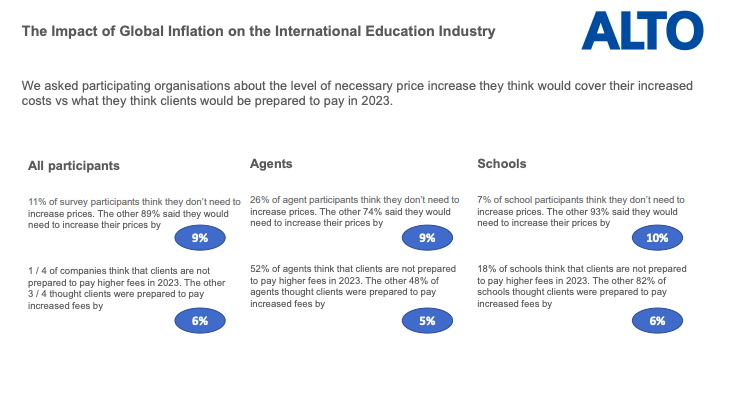 The 9% figure is what the 89% of 122 organisations (with both agents and schools participating) believed prices would need to increase by; however, three out of four of those organisations believe that clients would only be prepared to pay up to 6% more.

“It is now becoming very clear that the market participants whether being on the sender or receiver end agree on the global inflationary pressures becoming a major issue both for their businesses but also for the sustainability of our industry as a whole,” Dervish noted.

“The general sentiment of all the stakeholders is that the increase in prices of all services offered is inevitable with potential increases in mind being just a little under the actual global average inflation rates,” Dervish relented.

“Increasing energy costs combined with labour and other expenses is making it even more challenging to add the figures up at the year-end balance sheets for most businesses,” he added.

In the survey, ALTO fields its plans to embark on a “long-term pricing project” which will “look at ways to provide more flexibility within the international educational industry”.

The rigid pricing system, the survey states, where companies set their prices in June/July for the following year, means prices are set 18 months ahead – whereas other industries routinely use dynamic pricing for easy adjustments to figures.

“The hot topic of dynamic pricing, which has been on the agenda of the industry for many years, is now becoming even more interesting with potential technological services being offered to the sector in the near future,” Dervish pointed out.

Asked about the necessity of price adjustments more than once in a year, over half of all participants said it was not necessary – even more of the agents surveyed, 74% said it wasn’t needed.

Schools were more prepared for the idea, with 49% rejecting the need, but 22% of them did say twice a year would be beneficial. Some 19% of agents said that prices should be adjusted “whenever necessary”.

“In order for a dynamic pricing system to be put in place, the industry should most likely agree on a common ground of pricing structure to standardise their offerings,” said Dervish.

“In addition to this, both agents and schools need to find a trustful ground they can play on and exchange contracts,” he added.

In an additional part of the survey, just under half said that course fees discounting would stay at the same rate. Split between the agents and schools surveyed, 56% of agents believe a 7% increase would be necessary, but on average schools said there would be no change.