The latest ICEF Agent Voice survey compared perspectives of over 400 student recruitment agencies from 81 countries and was launched at ICEF Berlin last month.

Despite the disruption in recent years, the results paint a picture of strong recovery in international student mobility, significant growth in recruitment support for online courses and high expectations for 2023.

Some 73% of responding agents reported seeing an increased level of interest in studying abroad, with the majority expecting to see a further increase in demand across all program levels.

The majority expect to see growth in this cycle, with 74% expecting to see an increase for foundation, pathway and undergraduate programs, 74% for graduate and MBA programs and 72% for certificate/vocational diplomas. 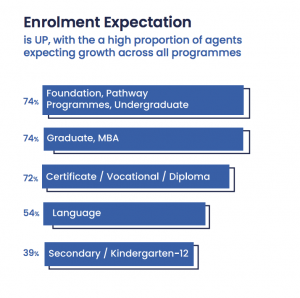 This global growth has been largely driven by increased access to student finance and post-study work rights and it is no surprise that 67% of agents reported opportunities to work or immigrate to the study destination were the biggest influence on student choice.

The biggest fear was rising global inflation as 87% of agents said the cost of living was the biggest student concern right now.

Recruiters have responded to money concerns by increasingly offering financial services to support their clients. A further 74% of agents reported helping their students facilitate tuition fee payments, with 34% adding financial products to their range of services.

Trust is undoubtedly growing in financial products and the ability for regulators to support loans for students whose ambition is to resettle overseas. The provision of more student finance options could unlock many potential markets outside of Asia such as Europe and Africa.

Despite closed borders or surplus demand affecting some markets, 88% of agents have established new partnerships in the past two years as a result of diversifying their institutional portfolio and range of study destinations.

The biggest surprise will be Australia still languishing in sixth place in a list of top destination countries of interest behind both Ireland and Germany in this opinion survey. 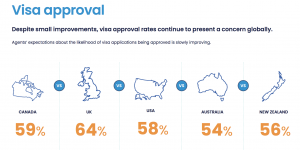 Canada, the UK and the US continue to be the top destinations of interest – but for students on a budget the emergence of online education could finally fill its mainstream potential with 87% of respondents saying they are currently promoting, or planning to promote online course.

Spreading potential risk has become a key priority and 57% said they appreciate the ability to continue to sell online education while borders were closed and 54% are seeing increased demand now it has been universally adopted as an accepted mode of delivery.

Markus Badde, CEO of ICEF praised the adaptability of agents, saying “without the digital transformation of education, it is difficult to imagine how the industry would have survived so well, recovered so quickly or in the face of financial crisis, could be so optimistic about the future”.

“We are not the same industry as we were in 2019, and [this survey] is signalling that student recruitment agents are continuing to adapt as new challenges and opportunities emerge.”

It would appear there is still room to improve digital innovation in agency operations though, as the survey revealed a continued reliance on manual processes in internal systems relating to invoicing commission and application processing.

The PIE recently reported on agent perspectives of late or non-payment from institutions, and this survey revealed 68% of agents say they do not use a CRM or digital software to support commission invoicing. 63% said they still use Excel or manual processes to invoice university partners.

Many technology developers will be encouraged by the potential to assist agents with digitalisation of their business, with particular focus now on the end of the sales funnel, including enrolment, retention and invoicing.