Earlier this year, former Chevening scholar and Afghan national Zainab Azizi decided to mentor students from her country who were planning to apply for the prestigious scholarship.

Chevening is a highly competitive government program that offers aspiring leaders from over 160 countries the chance to pursue a master’s degree in the UK, at no cost to them. Applications to the scheme are assessed on an annual basis.

Working alongside fellow alumni, Azizi hoped that they would be able to help other Afghan women secure the award and escape the misery that has enveloped the country since the Taliban seized control last year.

“I had allocated this one month of August specifically for… taking in three to five young women who want to apply, to mentor them, to provide them my comments and ideas on how to submit an application,” she said.

But when the 2023/24 application cycle opened at the beginning of August, Azizi and her mentees were shocked.

“Boom. August 1 came and the website said that application is closed for Afghans,” Azizi said. “It was so heartbreaking, honestly.” 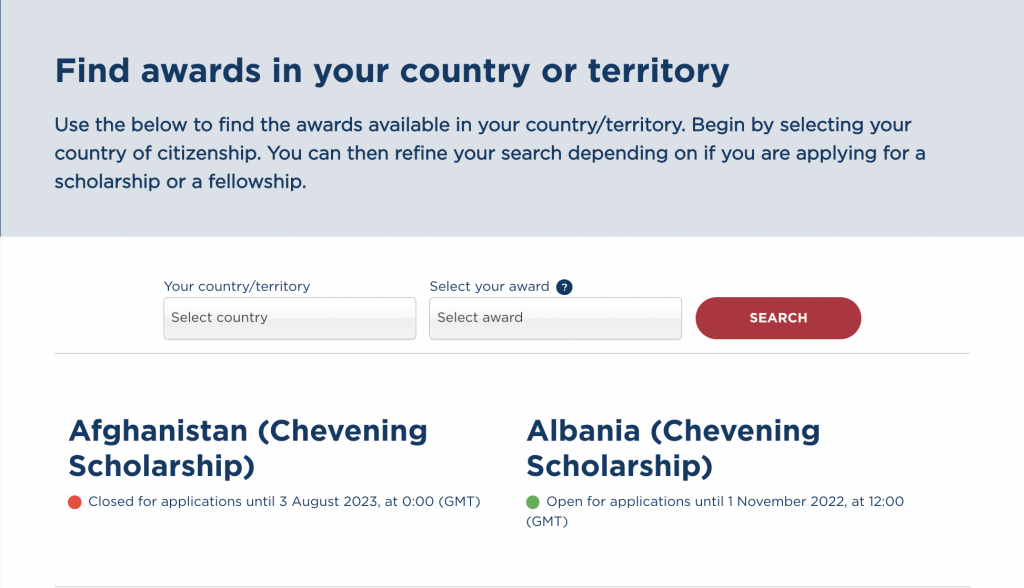 Chevening alumni from Afghanistan have described the decision to exclude Afghans from the scholarship scheme as “devastating” and have called on the UK government to reopen it.

They say that the students who were hoping to apply, many of whom are reluctant to speak out for fear of reprisal by the Taliban, feel abandoned by the international community.

The Foreign, Commonwealth and Development Office declined to comment publicly on the decision, but alumni claim that communication they have received from the government blames safety concerns.

“I don’t think this is a good reason,” said Negina Barai, who studied in the UK under a Chevening scholarship in 2020/21, during the peak of the Covid-19 pandemic. “At that time, we had our interviews online. We applied for our visas, we did all the process online and we made it.”

In June, the UK government announced that it was tripling the number of Chevening scholarships offered to Ukrainian students for the incoming year, taking all 68 candidates who were shortlisted for interviews.

Delighted to announce we’re tripling the number of Chevening scholarships for Ukrainian students this year!

Up to 68 of the brightest young people from Ukraine will undertake Masters’ degrees at top 🇬🇧universities, gaining expertise to lead better future for Ukraine 🇺🇦. pic.twitter.com/SLWyTXEZbU

“I understand that Afghans and Ukraine are going through the same and they both need this scholarship. Why are they only closed for Afghans and they didn’t close for Ukraine?” asked Barai.

Labour councillor Peymana Assad, who was born in Afghanistan and co-founded the Labour Foreign Policy Group, called the decision “discriminatory”.

“The only reason that the FCDO are doing this is because they are afraid Afghan students will claim asylum after their studies are finished,” Assad told The PIE News. “But they don’t mind if Ukrainian students do this. We should remind the UK government that claiming asylum as an Afghan is not a crime.”

The US government caused a similar outcry when it cancelled the Fulbright scholarship in March for Afghan applicants, before making a u-turn and confirming that semi-finalists would be considered for the 2023/24 round.

Afghan Youth and particularly women, deserve International Education opportunities including the @CheveningFCDO more than ever.

Please help them to fulfil their dreams and right to education.

Meanwhile, other Chevening alumni who remain in Afghanistan continue to wait for the government to fulfil its promise of resettlement in the UK.

Britain opened a new immigration pathway for this group in June but it is unclear whether anyone has yet relocated through this route.

Earlier this month, FCDO minister and Conservative peer Tariq Ahmad tweeted that the foreign office is working through the expressions of interest and “will be in touch as quickly as possible with those eligible”.

It is understood that the foreign office hopes to offer the Chevening scholarship to future Afghan cohorts, but, as the Taliban continues to prevent girls from studying past primary school, Chevening alumni are urging the UK government to immediately open the scheme to Afghans.

“If they continue closing the scholarship for Afghans, especially for girls, my question would be – what is the difference between the de facto authorities currently governing Afghanistan and a developed nation?” Barai said. “They both are banning Afghan women from education.”