The Australian Centre for Education has opened a new 8,000-student capacity campus in Cambodia’s capital city.

The opening of ACE’s sixth campus in the country – located in Chak Angre – was attended by the Cambodian minister of Education, Youth and Sport, Hang Chuon Naron, and the Australian foreign minister senator, Penny Wong.

Wong was in the country as Cambodia and Australia celebrated a milestone of 70 years of diplomatic relations. She also met prime minister Hun Sen and foreign minister Prak Sokhonn.

“Since 1992, ACE has played a crucial role in the development of English language education for Cambodian students, government officials, and professionals at various levels,” Hang Chuon Naron said on the opening of the new school.

Three decades ago Australian prime minister Paul Keating and one of Wong’s predecessors foreign minister Gareth Evans “understood the importance of the region we share”, she said.

“So, standing beside the Bassac River, a major branch of the Mekong, this new campus will equip even more young women and men including those with us today with the English skills to realise opportunities as international citizens. It stands as a reminder of a region we share a connected future,” Wong noted.

ACE and IDP Education country director, Mao Sreng, who was also at the event on August 4, said that over 30 years, more than half a million students of over 20 nationalities have studied at ACE schools.

The campus, which was previously a garment factory, has 2,000 students enrolled, and features an IDP Study Abroad Resource Centre and the IELTS Cambodia Official Test Centre. 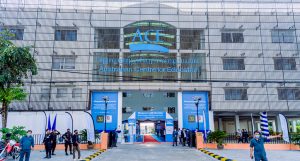 The official opening was held on August 4. Photo: ACE/ IDP

“Around 10,000 Cambodians have been placed into quality schools and universities overseas by our study abroad office,” he added.

While renovations were completed before Covid-19, the pandemic saw schools across Cambodia close. The building was later used as a vaccination centre with some 10,000 people from the surrounding communities receiving vaccines in the centre.

Speaking with The PIE in 2019, Sreng said that the demand for English language teaching in Cambodia had been booming, and ACE – launched by IDP in 1992 – is “second to none in Cambodia”.

In 2021, ACE Cambodia won the prestigious Language educator of the year category at The PIEoneer Awards.