Posted on Jul 17, 2020 by Marina Safronova
Posted in Analysis, under Global.
Tagged with China, edtech, US.
Bookmark the permalink.

China and the US dominate the global edtech landscape, each with eight unicorns out of 18 private companies with a valuation of over $1 billion. China’s global education venture capital flow however reached $19.8bn, more than double the US’s $9.5bn since 2010, according to HolonIQ.

So how did the dominance held by the country that gave the world such big names as Coursera and Duolingo shift on global edtech startup deals?

“Edtech is a very different sector to mainstream technology”

Before Covid-19, it had the largest online degree market, with more than three million students studying fully online, representing more than a $20bn market and growing fast.

HolonIQ reports that the US started the last decade the fastest growth in edtech investment, which peaked when LinkedIn acquired online learning company Lynda.com for $1.5bn in 2015.

However, following the most high-profile exit in edtech history, the overall US edtech investment, not limited by venture capital, started to contract.

“Investors turned to edtech but then very quickly worked out that it was a very different sector than mainstream technology,” says Patrick Brothers, a co-founder of HolonIQ.

The reorientation of American investors towards other sectors coincided with the investment boom in China and India. Contrasts between the US and Chinese markets contributed to the increasing investment gap.

Investment in China comes primarily from domestic firms, although they also pour money into the US edtech. For example, in 2018, NetDragon, a Chinese gaming business, acquired Californian education platform Edmodo. At the same time, instances when a US company enters the Asian market through acquisition are much rarer.

“Asian edtech markets are hard to break into for the Western companies,” says Steve Southwick, financial adviser and CEO at Pointful Education, a company that creates online curriculums for secondary learners.

Among the main obstacles, Southwick points out China’s infamous great firewall, the dominance of print materials over digital and high parental expectations.

Attitude towards spending on education also have a role to play. “Chinese and Asian parents are much more willing to pay for their children than western parents,” says Patrick Brothers from HolonIQ. He adds that the focus on school and academic achievement in Asia is much more intense.

Globally, parents in Hong Kong spend the most on children education: on average, over $132,000 from primary school all the way through to university.

The US comes fourth with $58,000, and China sixth with around $43,000, reported HSBC. At the same time, Chinese parents could spend the same amount of money just to prepare their child for university.

Another point to consider is that edtech in the US has been more successful in higher education, while in China, most of the startups are K-12, focusing on learning from kindergarten to the 12th grade.

“Up until the latest couple of years, K-12 was the sector where edtech dominated, but over the last two years it has become post-secondary focused,” tells Brothers The PIE.

The situation is changing, and the demand turns towards the jobs and non-accredited skills side where the US has advantages.

One of the biggest recent exits was selling New York’s coding boot camp General Assembly to the world’s second-largest human resources provider Adecco for $413m in 2018.

Another example is the US company Guild Education that connects universities and employers. Last year it became a unicorn,  attracting the highest amount of venture capital in the country.

“Each category [in edtech] will progress towards career education,” says Steve Southwick from Pointful Education. He sees the growing demand for practical programmes and skills acquisition.

However, US higher education startups face growing competition from nonprofit post-secondary online providers. During the pandemic, lots of American universities made their materials free.

Nonetheless, Brothers believes that both higher education and K-12 “will have a new appreciation for online learning and digital technology”.

“China is ambitious to implement AI in K-12, which just wouldn’t be tolerated in the US”

Of course, cultural differences also play an essential role in the adoption of every technology.

“China is ambitious to implement artificial intelligence (AI) in K-12, which just wouldn’t be tolerated in the US,” says Brothers.

“It would be thought inappropriate and a breach of privacy, whereas in China, it is thought of as an experimentation opportunity to find methods to get the kids ahead.”

Other differences experts name include varying levels of access to devices and internet and a greater orientation on language learning in China, which is not the focus in the US.

Despite some distinct advantages that China has, investors have not abandoned the US market. Quite the opposite – venture investment in US edtech companies in 2019 was at a five-year high.

Despite the contraction in the number of deals, venture investment in US edtech companies in 2019 was a five-year high in value, according to data from EdSurge. 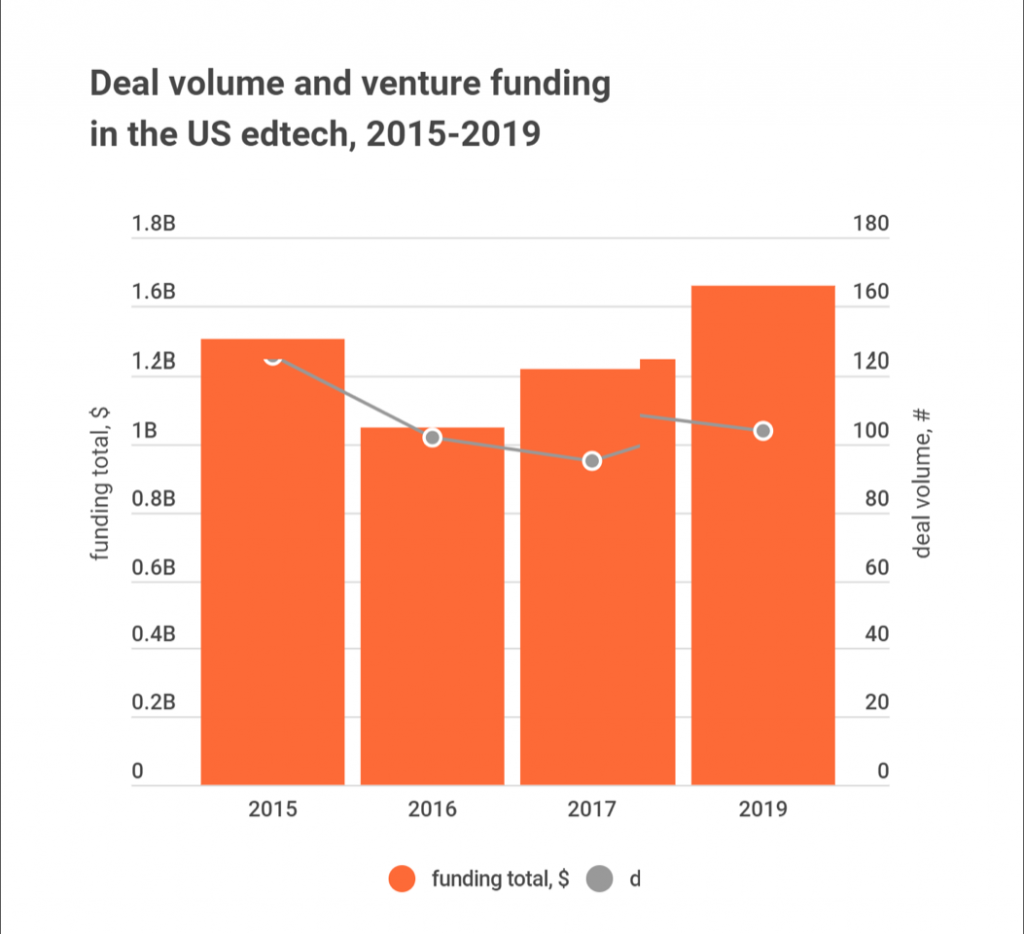 Advantages of the US edtech market

The US attracts investors with its innovation hubs in Silicon Valley and Boston and a high concentration of world-leading universities.

Asian companies enter the US market to access unique technology, curriculum and other applications that have been created in the US. The US benefits from more mature technology and know-how in integrating and understanding augmented and virtual reality.

“The US had more time to develop and integrate,” says Southwick. “Companies here have proved they were able to succeed, to raise money, to risk capital.”

However, the coronavirus epidemic will lead to shifts in the US edtech market, and longer-term impacts remain uncertain.

Global venture fund and seed accelerator 500 Startups, the top investor in higher education edtech in the US, anticipates a negative impact of Covid-19 on early-stage investment activity in 2020.

At the same time, it believes that the current circumstances have shown that the world needs better mechanisms within the education sector.

“500 remains interested in the edtech market, particularly as new behaviours begin to take shape within the sector,” says Neha Khera, partner at 500 Startups, to The PIE.

However, she worries that customers’ ability to pay may be reduced due to the current economic climate.

Along with healthcare and remote work solutions, edtech is seen as one of the safest sectors in the coronavirus environment. “Parents and teachers will be looking for solutions,” believes Steve Southwick from Pointful Education. “I think there are a tremendous amount of opportunities.”

“I think there are a tremendous amount of opportunities”

Patrick Brothers from HolonIQ has no doubt the US edtech market will develop in future but doubts about the positive impact of the pandemic.

“The question in the US is whether Covid-19 will accelerate the appetite to use digital or will it pause or slow down digital adoption,” adds Brothers.