Posted on Jun 29, 2018 by Chris Parr
Posted in Analysis, under Africa.
Tagged with Nigeria.
Bookmark the permalink.

Nigeria has a higher education crisis. Between 2010 and 2015, only 26 per cent of the 10 million applicants to Nigerian tertiary institutions gained admission. Put simply, demand isn’t just higher than supply – it is dwarfing it.

Last year alone, about 380,000 domestic university applicants did not get a place

The numbers do not lie. Last year alone, about 380,000 domestic university applicants did not get a place – and population trends suggest that the problem is not going to get better on its own.

“There are 1,200 primary school-aged children in Lagos for every public school place available”

The Population Institute Canada says that Nigeria has a population growth rate of 3.2 per cent – which translates to a doubling time of less than 22 years.

Meanwhile, its urban population has grown at an average annual rate of 6.5 per cent over the last 50 years, without a commensurate increase in social amenities and infrastructure, the Institute says.

According to 2017 data, 62 per cent of Nigeria’s near-200 million population is aged 24 or younger. The country’s 160 existing universities simply do not have the capacity to accommodate the millions of students who apply each year. But how can this problem be addressed?

“This is a huge question, and can’t be answered [without] some consideration of the lack of investment in schooling,” says Elaine Unterhalter, professor of education and international development at University College London.

“A study we have just done of public and private schooling in Lagos highlighted how, on the basis of official data, there are 1,200 primary school-aged children in Lagos for every public school place available.”

Around 10.5 million children are out of school in Nigeria as a whole – the highest number reported by any country in the world. This has implications for higher education institutions who must compete with the rest of the education sector for much-needed government investment.

“With this lack of investment in public schooling, the private sector has stepped in and there are private schools for the super-rich, the rich, the middle class and the poor…..It’s the same in higher education, with a very large number of private universities of many different forms.”

Unterhalter tells The PIE News that public investment in higher education is “a more fraught political issue than investment in basic education, which is key human right”. However, for economic and political planning to be successful in Nigeria, and for social development to gather pace, the higher education sector needed to be seen as “crucial”, and “not a luxury ‘add-on’,” she adds.

Peter Okebukola, distinguished professor of science and computer education at Lagos State University and a former head of Nigeria’s National Universities Commission, agrees that the size of the task facing the Nigerian government is huge.

“With more than two million candidates striving to fill about 750,000 available spaces in the universities, polytechnics and colleges of education, the challenge of opening the doors for more to enter the higher education system and ensure that quality graduates come out of it in the face of resource handicaps is stark,” he says.

However, positive steps are being taken. Speaking in April at the annual conference of the UK’s Quality Assurance Agency, Abdulrasheed Abubakar, the current executive secretary of the National Universities Commission, said that more than 290 new universities were planned for the country.

“This is a very serious situation,” he said. “One million students do not get access to university not because they have failed their exams, but because the capacity is not there.” He said it was “dangerous” to have “frustrated youths left out on the streets”.

His organisation is in the process of assessing 292 applications from institutions wanting to become private universities. There are currently just 163 universities in Nigeria, so the new institutions would represent a significant capacity boost for the country.

Nigeria is also aiming to recruit an extra 10,000 university lecturers in the next five years, which would take the total number to about 72,000 – an improvement, but still short of the “about 88,000” academics Abubakar says are needed.

Okebukola says that the Nigerian government’s Ministerial Strategic Plan for 2016-2019 has “clearly defined pathways which are currently being implemented to tackle the challenge of access.” 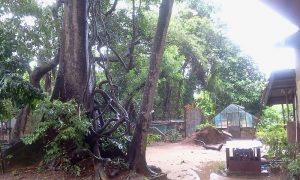 The botanical garden at the University of Lagos. Photo: Wikimedia Commons

These include the “exploration of quality open and distance learning delivery systems”, along with  “expansion of the carrying capacities of existing conventional universities”.

“Many conventional universities in good standing with respect to quality are being encouraged by the National Universities Commission to switch to a dual mode, with a strong open and distance learning delivery system,” Okebukola adds – something he hopes will “significantly bolster” the capacity of the institutions.

“In addition, the National Open University of Nigeria, where I serve as chairman of the council, currently enrols about 450,000 students, but it is being strengthened to increase enrolment to about 700,000 in the next five years.”

These developments are undoubtedly positive, but until they come to fruition, the millions of would-be students who do not get a place domestically have to look elsewhere, and those families who can afford the fees look abroad.

In reality, however, international study is not a realistic option for most in Nigeria. Indeed, although there are proposals to increase the monthly minimum wage from  ₦18,000 to ₦56,000, a 211 per cent increase, this still only equates to around US$155 a month. 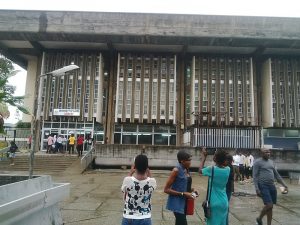 The main library at the University of Lagos. Photo: Wikimedia Commons

Unsurprisingly, given its domestic capacity issues, there are very few international students coming to Nigeria to study.

“We have a sprinkle of international students,” Okebukola says, “but since the university system struggles to admit even a quarter of local students, very few spaces become available for overseas students.”

He said another reason that Nigeria was unattractive to internationally mobile students was the “instability of academic calendar” caused by “disruptions due to strike action” which can elongate the duration of courses.

It is not unknown in recent years for Nigerian universities to shut down for months at a time because of strike action. Recent industrial action by professional and administrative staff that began in December last year was not resolved for more than three months, with academics in some institutions taking on additional roles to keep institutions open.

“International study is not a realistic option for most in Nigeria”

Abubakar said at the QAA event that he hoped the creation of additional institutions in the country would not only increase capacity quickly but also weaken the hand of the trade unions.

“Calendars have become so unstable and unpredictable,” he said. “When lecturers go on strike they can close universities for six months.”

Despite the many difficulties that Nigeria’s higher education needs to overcome, Unterhalter is optimistic.

“There are enormous challenges about raising revenue, building and sustaining capacity,” she says, adding her belief that “Nigeria has immense resources and talents to do this”.

Nigeria’s National Universities Commission has put in place a five-year “blueprint”, outlining how its higher education system can be improved by 2023. It is known as the Rasheed Revitalisation Plan, after Abdulrasheed Abubakar, executive secretary of the NUC, who helped to develop it. Among other objectives, it states that: