Posted on May 10, 2018 by Patrick Atack
Posted in Analysis, under .
Tagged with IB, IB diploma, International Baccalaureate.
Bookmark the permalink.

When you start up a conversation about the International Baccalaureate, the reaction can sometimes be one of nervousness. For some, it can be perceived as a mysterious curriculum.

In a recent interview with The PIE News, Gavin Newton-Tanzer of Sunrise, a company delivering Western-style curriculum planning and extra-curricular activities in China, claimed that Chinese schools prefer A-Level or AP courses because the IB is “significantly harder” for Chinese students.

“What could education do to create a more peaceful future? That really was where [the founders] started”

Many would contest that view, but the fact that such a viewpoint still holds illustrates how an air of mystique or impenetrability about the system can exist.

But the pedagogical outlier, the house with no home (it is not based in a certain jurisdiction, like A-Levels or the AP) turns 50 this year. It’s now far broader than a single post-16 study curriculum and boasts at least 1.2 million students, being taught by at least 75,000 teachers, in at least 4,200 schools worldwide.

The flagship diploma program comprises, essentially, three core elements: Theory of knowledge (in which students reflect on the nature of knowledge and on how we know what we claim to know); The extended essay (an independent, self-directed piece of research); and Creativity, activity, service (project-based).

Different courses fall into six subject groups areas: Studies in language and literature; Language acquisition; Individuals and societies; Sciences; Mathematics; The arts. Second language acquisition is, therefore, an embedded expectation in the curriculum that can rightly claim to be aimed at global citizens.

The IB’s origins are firmly rooted in Europe and began two decades after the Second World War – the traumas of which were still vividly remembered by the originators of the IB.

Freddie Oomkens, in charge of global branding for the IBO, posits, “Our founders weren’t necessarily the long-haired hippies [of 1968]. They were established educators, their perspective [often] looking back… they had gone through World War II. A lot of them had not necessarily fought in World War I, but they had seen what two world wars had done.”

“If you look at the IB curriculum properly, this is as balanced as it could possibly be”

A life lesson or: a lesson for life?

One of the key tenets of the IB, and one that many readers may recognise, is that of a ‘real world’ pedagogy.

Brian Nixon, head teacher at TASIS American school in the UK, tells The PIE what his 19-year involvement with the IB has taught him about this claim and aim. “We… deal with real world issues. We are looking at problems that exist now,” he says.

That’s not limited to the IB Diploma course, Nixon points out.

“Even in the primary years program, [we ask] what is the concept of conflict? What does it look like? What can we do about it? Even at very young ages, we are looking at real issues and concepts that are around us now,” Nixon says.

“Then that builds all the way through the IB Diploma. [It’s] key for us that it’s about the world. It’s about what’s happening around us, and what can we learn from that.”

“This emphasis on ‘real world’ learning is also highlighted by Oomkens, who signals a more pedagogical understanding of the phrase. 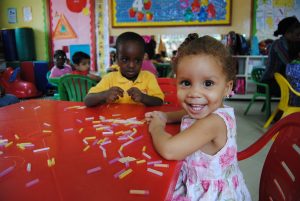 The fact that the IB views the world through an international lens makes some parents select an IB-teaching school for their children. Photo: IB

“The IB actually starts teaching real world skills at [the primary] level. Those students do an exhibition, something they organise themselves and show. The research into that… indicates that is what we call real world skills, which is unusual and very rare at that sort of age level”.

“[It’s] the same in the middle years program. Critical thinking, team work, inquiry is part of the program,” he tells The PIE.

Emma Horner, admissions director at ISSOS in the UK and the US, which puts on summer school courses for students at various levels of the IB’s offerings, agrees that the ‘real world’ aspect of the curriculum is based in the way students learn.

“We know that there are various different ways of learning,” Horner tell us, and ISSOS’s international student spread means all of those ways need to be addressed in each lesson.

To do this, she says, “we develop a lot of different workshops. We have a lot of small discussion groups and a lot of active learning”.

But this open style (“Our teachers hope to use a more of a seminar-based classroom”) may be similar to what students will find in IB classes, but many are not used to it.

“For those students, it’s really important to come to something like the summer school to get a taste of the skills that they are going to need. It’s more looking at the general outlay of the IB as opposed to looking at specific subjects,” Horner explains.

This wide-ranging syllabus challenges students of all ages to think in diverse ways, and about subjects that they may never have experienced before. But as well as arguably preparing students for HE in a more constructive way than equivalent qualifications, this technique can be seen to put more pressure on students.

It’s okay to slow down

When researching for this piece, The PIE spoke to several people whose first impression of the International Baccalaureate [diploma] was of an educational undertaking which could be bad for their health.

While this is an exaggeration of the reality, the IB is certainly a testing diploma, and as Horner attests, students can feel extremely pressured by parts of the diploma course. Especially the extended essay, which is a 4,000-word thesis.

“Quite often when [students] arrive, especially those who are doing the extended essay part of the IB… they’re quite often stressed because they feel the pressure that they have this huge essay that they’ve got to try and get done the next year,” she relates.

The answer, Horner says, is simple. “You can have that downtime,” staff tell the worried teenagers. 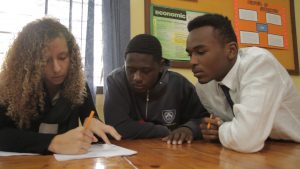 Students are encouraged to alleviate the pressure of the diploma course with some “down time”. Photo: IB

“Part of our teaching is to say take a step back, and try and get them to have a bit of head space – both physically and mentally,” she emphasises. “We say, ok, let’s just take this one step at a time. After a couple of days they start to relax.”

Oomkens says that the IB’s “constant cycle of improvement” helps the organisation deal with problems like this. “One of the IB’s principles of an inclusive education is that an IB education is enhanced by the creation of responsive environments that promote a sense of belonging, safety, self-worth,” he says. “Managing stress and workload pressures is one aspect of this.”

“The IB attempts to view the world with an international perspective not from, for example, an American one”

“The whole point of the IB”, Oomkens adds, “is to create conditions [so students] perform to the best of their abilities.”

And there is another option that can now alleviate some issues, says Nixon at TASIS: “If you are going to struggle doing the six subject areas, you don’t have to do the full [diploma] program, you can do the Career-related program,” he says. “[This has] opened up the philosophy and the mission of the IB to many other students.”

Given the IB’s USP as a real world and globally-focused curriculum, it stands to reason that its programs have spread throughout the world.

For some parents, it is the fact that the IB does see the world through such an international lens that makes them select an IB-teaching school for their children.

Dr Marieke Dekker is mother to an IB student attending the International School of Moshi in Tanzania, Africa. She says: “The IB attempts to view the world with an international perspective not from, for example, an American one.”

“Part of our teaching is to say take a step back, and try and get students to have a bit of head space”

She elaborates: “When I visited UWC Atlantic College [in the UK], and got to know the subject ’World Religions’, it was an eye opener… if you look at the IB curriculum properly, this is as balanced as it could possibly be.”

Dekker also nods to the heritage that IB has when she adds that “we as parents also did the IB”.

In the Middle East, Dr Hana Malhas, school director at Mashrek International School in Jordan, says it is the modern “student-centred” approach to teaching that is gaining traction in this part of the world.

“The IB, in the past few years, has become one of the most unique yet popular programs offered in the Middle East,” she states. “The IB’s pedagogy has transformed the teaching and learning process from a teacher-centred approach to a student-centred approach with emphasis on formative assessment and effective feedback.”

Its core aim, “to create a better world through education”, is clearly being better articulated and understood after 50 years, while the structure is consistently revised.

Nixon believes the IB will continue from strength to strength. “If I look at the world of a teenager right now, I think something like the IB is absolutely essential,” he says. “[I can’t think of] any time in my life time where this is needed more than now.”