Posted on Feb 18, 2019 by Ruhi Khan
Posted in Analysis, under Asia.
Tagged with India, Sannam S4, US.
Bookmark the permalink.

Indian students constitute the second largest market for many international study destinations and for decades, a constant worrying factor for the Indian government has been losing its best minds to the West.

About Ruhi Khan
Ruhi Khan has worked as a journalist in Mumbai and London in both print and broadcast media. A Jefferson fellow and recipient of the Mary Morgan Hewitt Award for Women in Journalism in 2008, Ruhi currently lives in London and writes on a wide range of issues.

But now India has embarked on an exciting journey to convert its brain drain into brain gain by attracting expertise and investment in higher education through US-India Knowledge Exchange. And now, India is investing $20 million to create ‘Innovation and Entrepreneurship’ hubs in higher education institutions that bring American universities to its campus.

USIKE was launched in June 2017 at Georgetown University in Washington DC to strengthen the strategic partnership between the US and India through collaboration in higher education, research on key issue areas, and people-to-people linkages. For the US, such collaborations with India will help offset its losses in the international education sector.

While Open Doors report that international students contributed $42.4 billion (up from $39bn in 2016) to the US economy in 2017, market share has been slipping. So it comes as no surprise that the US State Department has now launched Partnership 2020: Leveraging US-India Cooperation in Higher Education, which focuses on greater collaboration between the two countries.

Adrian Mutton, founder and CEO of Indian market entry facilitator, Sannam S4 – and the pioneer of the USIKE – says that “the potential of cross-border collaboration, higher education reform in India and significant talent pools for future projects provided impetus to the Department of State to launch a project that focuses on these very themes”.

Aghi believes that “education is a natural area of the partnership between the US and India” and says that USISPF is committed to “building ties” between educational institutions in the two countries.

An important product of this collaboration is the 10 ‘Innovation and Entrepreneurship’ hubs that India will be funding at the rate of $2 million each. This $20 million investment promises to create a close university-university collaboration on knowledge and involve sector specific industries to share their expertise.

In one such case, an American university has worked in India for the last five decades on agriculture development, food system transformation, and nutrition security. Their engagement in India led to the set-up of an institute for agriculture and nutrition, in partnership with a renowned trust. 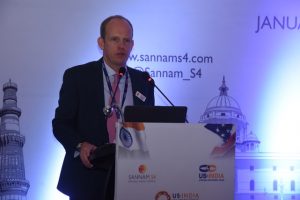 Under the new Rashtriya Uchchatar Shiksha Abhiyan scheme initiated by the Government of India’s Ministry of Human Resource Development-led program, an American university (which cannot be named until the agreement has been finalised) has now been matched with Guru Nanak Dev University in Amritsar that also has an excellent reputation for its Agriculture department.

With the partnership, the American university will be able to work closely with Guru Nanak Dev University by setting up capacity-building programs and expose students as well as faculty to the latest technology and research in the agriculture sector.

“This way, they can approach their current research in an innovative manner – and potentially even utilise it for commercialisation in the future. Each university partnership will have a different approach to setting up the ‘Innovation and Entrepreneurship’ hubs, as per the topic of collaboration,” explains Mutton of Sannam S4, adding that a Memorandum of Understanding will be signed between these universities by the end of the month.

“Indian colleges are extremely receptive to this program”

“The level of representation and participation from Indian State Public Universities during our pre-launch event in New Delhi assured us that Indian colleges are extremely receptive to this program,” Mutton told The PIE News. Their enthusiasm to network with more American universities and set up other partnerships demonstrate that they are willing to upgrade their innovation and entrepreneurship ecosystems on campus.”

The delegation also participated in the highly publicised Vibrant Gujarat summit whose theme was to show that India is open for strong international partnerships.

“Educational Institutions are core to India achieving her ambitions and we have seen some exciting industry-education interplay which we are hoping will evolve into sustainable programs in the future,” added Lakshmi Iyer, executive director and head of Education at Sannam S4.

The delegation also participated in discussions with Indian corporations and philanthropists regarding the creation of new universities in the country, along with state-level interest in developing Knowledge cities.

However international players are also wary of regulatory, tax, financial, and compliance barriers, which are particularly complex for US non-profit organisations. Major impediments include issues like tax exemptions, Foreign Contribution (Regulation) Act and permanent establishment tax.

“By bringing together relevant groups in the coming months, we will be presenting very specific policy recommendations to the Indian government to initiate policy reform,” Mutton told The PIE.

“The vision for USIKE is to convene the leading minds in academia, the private sector and the government to develop new partnership opportunities, initiate policy reform & re-establish the US-India Government to Government dialogue on higher education.”