‘You Only Live Once. But if you live in Cyprus once is Enough’ runs the tagline for a holiday company advertising on social media. If everyone bought into that ideal, there would be no holidays there, and a very crowded island, but as a reflection of how Cypriots feel about their country – and its attraction to students from abroad – it squarely hits the mark.

Until 1989 there were no universities in Cyprus, today there are nine, three public and six private, along with around 50 colleges of higher education.

Cyprus now has a number of headline claims it can make about its status as an education hub – the EU’s statistics service Eurostat says that 58% of 30-34 year olds in Cyprus have a tertiary education degree, above the EU average of 41%; the IMD World Talent Ranking puts Cyprus 17th out of 63 countries for attracting, nurturing and retaining talent; the QS World University Rankings places Cyprus first in the region for the highest number of institutions per one million of the population.

The EC’s European Innovation scoreboard 2021 showed Cyprus had the second higher increase in performance across European nations and Cyprus grew by 55.4% in transnational education, becoming the leading nation worldwide in postgraduate UK TNE.

Meanwhile, in terms of research, there are a burgeoning number of collaborations between institutions and industry and research centres of excellence across areas from the environment to genetics. A tangible of this development is recorded by the level of funding Cyprus has received from the European Horizon 2020 funding program. As of 2018, Cyprus received €90 million across 245 research projects, the highest amount of Horizon 2020 funding per capita across all member states.

In the course of the increase, the number of international students in Cyprus overtook the number of Cypriot students for the first time, with 54.5% of students coming from both EU and other non-European countries.

Neighbouring Greece represents 62% of international students, followed by India and Nepal, which sent 4,267 and 1,486 students, respectively. At the crossroads of three continents, Asia, Europe and Africa, Cyprus has an appetite for further growth and to put itself firmly on the HE map.

Why do international students come to Cyprus?

Despite a difficult past and not altogether certain future, safety is one of Cyprus’ major attractions to students from abroad. Its reputation for safety (in 2020 an insurance company placed it fifth safest in the world) is mentioned time and time again by educators across universities, colleges and international schools. Many also mention warmth – that of the welcome and of the weather, with an average annual temperature of 25°C and year-round sunshine.

A relatively low cost of living is also in the mix, but as some educators point out that all of these lifestyle plus points are an added bonus to the decisions that today’s vocationally-minded students are making.

Christoforos Charalambous, director of Administration and Finance – University Council vice president of Frederick University, (a private university operating from a campus in Nicosia, the capital, and one in Limassol) lays out the bottom line of what international students coming to Cyprus can expect.

“Additionally, there is a strong student-oriented philosophy and provision of a range of tailored student services, such as orientation programs, counselling centre, career office, academic support etc. Importantly, they also offer funded student mobility programs (such as Erasmus+) that allow students to combine studies or work experience in different European universities.”

At undergraduate level, education, medicine (for example EUC has 850 medicine and dentistry students with 75 per cent coming mainly from Central and Northern Europe), law, computer science and psychology are most attractive to international students. At postgraduate, masters in business administration is popular, with the Open University of Cyprus offering it in Greek and English.

Attracting international students is about “solving a specific problem for a specific cohort”, according to University of Nicosia CEO Antonis Polemitis.

For the University of Nicosia – whose student population has gone from 95% Cypriot to under 30% in a decade – the Medical School started out as a joint degree with St George’s University, London before becoming an entity in its own right. Its placement locations include the Sheba Medical Center in Israel, ranked among the world’s top ten hospitals.

In the case of EUC – 45% of its 7,500 students are now from abroad – the first graduate class (in 2013) from its School of Medicine had an equal number of Cypriot and international students.

“It is a mark of the school’s extraordinary success in premier medical education, research and healthcare, that today, almost a decade since its operation, [the school] attracts students from over 28 different countries,” Hadjikyprianou says.

“Our admission process has as a result become more competitive and we have a very strong demand from abroad.”

On the finance side, there’s much moving and shaking too. Hadjikyprianou believes that Cyprus will continue its “upward trajectory” on the international education scene, and that EUC is doing its bit towards that by “linking up with innovators, the business community, investing more in research and looking to our regional role, here in the eastern Mediterranean”. 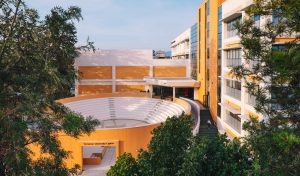 The weather is not Cyprus’s only selling point for international students. Photo: EUC

EUC’s School of Business Administration’s research collaboration agreement with the Cambridge Centre for Alternative Finance at Cambridge Judge Business School is a good example, he says, which aims to “accelerate tech-enabled financial innovation and knowledge sharing in the Middle East and North Africa countries and the broader Mediterranean region”.

In the financial realm, the University of Nicosia is “the leading university globally in the digital currency and blockchain field”, according to to Polemitis, boasting “the world’s largest team – faculty and staff – focused on this project”.

Will Cyprus continue to grow as an education hub?

“Student data demonstrates the success of Cyprus’s drive to put the island on the map as an established higher education and research hub in Europe,” says Pantelitsa Michael, business development manager for International Education Services at British Council Cyprus.

More than 13,600 students in Cyprus  registered on so-called UK TNE courses in  2018/19, which indicates an 81% increase since 2016-17 and “confirms Cyprus position amongst the fastest growing UK TNE markets worldwide”, she adds.

While the signs are good, Polemitis knows that international student recruitment is “staggeringly competitive with a golden age of choice for students”. Undergraduates value a range of features such as “residential experience, employability and good campuses” and that institutions need all of these to succeed, he suggests.

“Cyprus still needs larger universities,” says Polemitis. “If everyone aggregates their relative strengths, over the next 5-10 years we have a chance for a Ireland or a New Zealand type situation, where countries were not on the international education map and now they are.”

This is an abridged version of an article first published in The PIE Review.