Posted on May 3, 2019 by Kerrie Kennedy
Posted in Analysis, under Global.
Tagged with accountancy, Accounting, Global career.
Bookmark the permalink.

Change is afoot in the world of accountancy. A report by global technology firm Atherton Research warned that by 2020, accounting, tax, payroll, auditing and banking tasks will likely be fully automated using artificial intelligence-based technologies, disrupting the accounting industry in ways unseen for at least half a century, and ultimately spelling bad news for the humble number-cruncher.

Accountancy is very much an international language

But rather than focusing on the negative impact that advancements in AI could pose to the profession, many institutions and accountancy qualification providers are choosing to embrace modern technology, and some are even using it to their advantage.

“There’s always a question mark over what technology is going to do to any of the professions,” asserts director of education and qualifications at the Institute of Chartered Accountants in England and Wales, Shaun Robertson.

The digital wave is game-changing, he tells The PIE, one that will change the rules quite significantly.

“That gives us an opportunity because students can concentrate more on developing the skills to become trusted professionals, and that’s one thing that the digital technologies won’t be able to do in the short term.”

As Rob Sowerby, director of Professional Courses at London School of Business and Finance in the UK puts it, AI will bring dramatic changes to the profession, but not necessarily negative ones. “Data analytics will become fundamental to the work that an accountant will deal with, and trainee accountants will begin to see a very different work environment over time,” he says.

“Does it mean accountants will be replaced by machines? The answer is yes and no: there will be more automation, but also more data for accountants to analyse.”

The age of automation doesn’t seem to be putting off many prospective students, either. In July 2018, the Financial Reporting Council calculated the number of accountancy students worldwide at around 590,000 and recorded a 2.4 per cent increase in student numbers from 2016-17.

ICAEW has been experiencing similar growth, adds Robertson. “We’ve seen our highest intake of students from around the world over the last few years,” he says, putting ICAEW’s current total at around 27,000. And they’re not the only ones witnessing increased enrolments.

As more students look to China as a choice destination for education and post-study work opportunities, some of the top institutions in the region are reporting an influx of interest in the accountancy courses on offer there.

But it’s not just major financial hubs like Hong Kong that are seeing a surge in interest from a new generation of budding accountants. 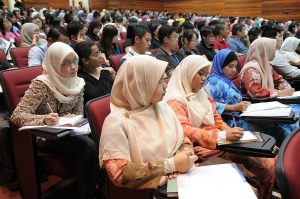 In ASEAN countries where the demand for professional accountants is abundant, Malvern International’s subsidiary in Singapore, SAA Global Education, and London School of Accounting and Finance Jakarta has begun offering students a dual-city study option to open up global career opportunities for the students there and strengthen the profession in Indonesia.

“The demand for accounting qualifications, particularly ones with a pathway to becoming a chartered accountant, is growing all the time,” explains chief executive officer of Malvern International, Sam Malafeh.

“We offer accountancy to just a small cohort in London, but we have over 1,000 accountancy students in Singapore and another 1,000 in Malaysia,” he explains.

“The demand for accounting qualifications is growing all the time”

Perhaps one of the most astonishing success stories, however, is the UK’s Oxford Brookes University, where 181,000 students were enrolled on its BSc in Applied Accounting program last year, accounting for 43 per cent of the total number of students partaking in UK higher education TNE in 2016−17 alone.

“It really is an unusual and unique program, and since it started, we’ve had 30,000 graduates from all over the world,” explains Howard Brown, head of the Department of Accounting, Finance and Economics at Oxford Brookes Business School.

“But not all of the [181,000] students are going to progress through to the degree because it’s a combination of an academic degree and a professional qualification, and many students just intending to get the qualification, the ACCA.”

Purveyors of one the most recognisable accountancy credentials available, the Association of Chartered Certified Accountants program can be studied in around 170 countries and boasts close to half a million students worldwide.

Of the approximately 1,600 students who engaged in the additional work required to qualify for Oxford Brookes’ BSc in Applied Accounting in the latter half of 2017, Brown reveals, the majority were based in Pakistan, followed by students in the UK, Malaysia, Singapore and across the Caribbean.

But why does a large variety of students from around the world choose to pursue professional qualifications such as the ACCA – rather than studying towards a full undergraduate degree?

“In terms of technical complexity, the level of rigour in the ACCA is covered in a manner that a more academic course may miss,” suggests Sowerby at LSBF, where the program has been offered for more than a decade.

But what really makes these so popular with hundreds of thousands of students comes down to the attractiveness of gaining a qualification that is respected internationally, regardless of where the learner is domiciled or the study route they’ve taken.

“Our product is a global qualification, so wherever you sit in the world it is exactly the same,” explains Robertson when asked what draws students to ICAEW’s chartered qualification, the ACA.

“We spend a lot of time working out arrangements so that there can be reciprocity or a route into the profession from other countries. So if a student gets qualified in London, they can go to Canada or South Africa, and their qualification is recognised there.”

“Our product is a global qualification, so wherever you sit in the world it is exactly the same”

But chartered accountancy isn’t right for every learner. In response to the surge in demand in emerging economies, changing attitudes towards the value of apprenticeships and people simply looking for a career change, the vocational training side of accountancy (qualifications that focus on the ‘number crunching’) also remain popular.

Originally seen as a stepping stone towards chartered status, the Association of Accounting Technicians qualification has become highly respected in its own right; one that is opening up professional opportunities for people working in top level companies that might otherwise not have been possible.

In fact, only around 30 per cent of those with an AAT qualification choose to go on to become chartered accountants, International Development manager at AAT Justin Kyriakou tells The PIE. And AAT students tend to be those who are looking for “a profession that will be a passport for them as much as it is a skill set”, he says.

“Accountancy is very much an international language,” he continues. “And while the commentary may be in Malaysian, Chinese or whatever country, the way you go about the numbers is the same whatever country you’re in, particularly if they are International Financial Reporting Standards.”

Despite an eight per cent decrease in the number of ATT students worldwide from 2016-17, in Kyriakou’s view, the concern that AI advancements will render technical skills a thing of the past is not one that should have students rushing to consider alternative professions.

“The technical skills are changing to suit the technology,” he surmises. “Lots of universities now want to incorporate the technical elements into their programs.”

But there is little point in having sound technical knowledge unless the students are taught to interpret the results and advise and communicate with colleagues and clients, adds Robertson at ICAEW.

“It doesn’t matter if you’re working in Sheffield or Singapore,” he says. “Students need to develop strong communication skills, and having that ability to interact with different people and cultures is an increasingly important part of the profession.”

So with the myriad prospects and the gateway to global opportunities that accountancy qualifications can offer, is the profession still staid?

“There is an element of that stigma there, but chartered accountants are like the GPs of the business world, it’s more about becoming that trusted professional to help people find an answer to their problems,” says Robertson.

Students are much more forward-thinking and discerning, adds Kyriakou, and fewer are looking for a short-term solution.

“Far from accounting being a bit dour and grey, if a student has the right skills and accountancy training, it means that they can do the same job in any company in any part of the world, and I think that’s really compelling.”